It was around the year, that I had the moment where I called the low point in my life, where I lost the energy to do anything and I have no idea where to go or what to do in the future. Basically I felt that my life was going nowhere.

At the time I just finished my job and the clock was striking 5 pm, I turn off my computer then took my bag. I decided to return home early. I walked to my boarding house with some questions that disturbing my mind. “Why I couldn’t finish my job well?” “Why I haven’t already got a better job?” “Why I still couldn’t find my Passion?” and so on and so on.

Some of the things that happened in my past has triggered me to this kind of thinking. Some of the past events that I considered as a failure moments in my life:

1st,
When I was in Senior high school, I had intention to continue my study in Psychology. But, I don’t like to learn social science such as : Geography, History, or Economy. I have never tried to learn any social science that could give me so much opportunity to enter the Psychology Major. Because of my reluctance and lack of willing on learning those things, so I failed to enter Psychology Major in Gadjah Mada University.

My lack of tenacity made me missed the opportunity to be a psychologist. So I decided to enter another major in Gadjah Mada University, which is Pharmacy.

2nd,
When I was in college, I want to study abroad to earn my master degree. I wanted to apply for a scholarship, but I realized that my English was not good enough to get the scholarship. At that time, I still have 2 years to learn English, but I haven’t tried just because I have no confidence. Until I have graduated from Gadjah Mada University, I have never taken any English course to help me improve my English.

I miss the opportunity to apply for a scholarship, just because I didn’t try to improve my English.

What happened to me at the time was that I was over thinking and put more emphasize on my limitations and use them as an excuse instead of finding a solution. 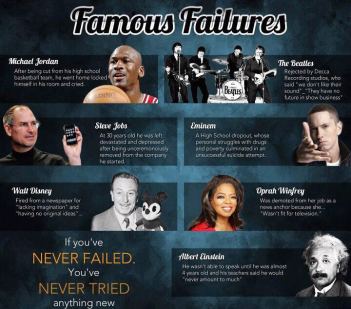 Oprah Winfrey was demoted from her job as a news anchor because she “Wasn’t fit for television”. At that time, African Americans were seldom seen on television but Oprah started. What do you think If that time, Oprah was give up to pursue her dream? She would never become a Host of Multi award winning Talk Show and The Most Influential Woman in The World. Currently, She has television network, with name OWN – Oprah Winfrey Networking.

Steve Jobs, at 30 years old he left devastated and depressed after being unceremoniously removed from the company he started. But, he has never stopped to make an innovation and He became a co-founder of Apple Incorporate and co-founder of Pixar Animation Studios.

This picture has given me an AHA moment, where I realized that even the highly successful person such as Steve Jobs and Oprah Winfrey have been rejected and experienced the low points some times in their life. The only thing that make them incredible is they never looked back and kept on going.

Now, I decided to shift my way of thinking. Instead of thinking too much about my limitations in English, I need to find a solution to improve my English. So, I decided to join the Toastmaster. I still have no confidence in my English, the first time I decided to join this club. Honestly, I always tried to avoid any kind of roles or opportunities to be a speaker or being in the spotlight. I was hoping and praying for other club members not to choose me.

One day, I had my first opportunity to participated as a contestant in table topic & International Speech Contest, since I decided to join the Toastmaster in October 2013. I only had a month to prepare myself for contest. What I was thinking at the time is how to ran away from the contest. But, the other part of me has convinced me to stay and face the challenge.

Before the contest, I prepared myself by reading a lot of articles and books and did some rehearsal with my friend. I also gave a simple challenge to myself not to make a lot of pauses while delivering the speech. So, I decided to join the contest and I was happy that I finally succeeded to defeat my fear. Also, the other thing that made me happy was my friend who said to me that “Wow, you have improved a lot”.

My experience in joining Toastmaster has given me a huge lesson. That you can find solutions anywhere as long as you want to try. You would never know your potential until you start to try something new.

So, enjoy your journey in life by trying anything new and positive. You might find your new talent that you might never know you have.

View all posts by attachriirotulm

This site uses Akismet to reduce spam. Learn how your comment data is processed.